City of Lloydminster is updating its Municipal Development Plan (MDP). The MDP is the main tool that City Council and administration have to guide land use planning within the City. In the past decade, Lloydminster experienced significant change concurrent with various economic challenges within the Province of Alberta. As one of the fastest-growing communities in the region, discussions about the limited land inventory to support growth initiated back in 2011 when the current MDP Bylaw was being prepared.

Fast-forward to 2022, with the annexation of 23.5 quarter sections of land along Lloydminster’s northern, western, and southern boundaries slated to be approved by the Province of Saskatchewan (it received the Government of Alberta’s approval on January 26, 2022), new development is once again a conceivable scenario as Lloydminster is poised for considerable change.

These development pressures, along with a growing focus on economic development suggest the 2013 MDP requires a complete overhaul to capture Lloydminster’s current challenges and to develop a new community vision and philosophy for the foreseeable future.

The MDP is the policy framework that governs land use planning within the City. The current MDP was approved in 2013 and does not reflect the current development vision and goals of the community. The process of updating the MDP that the City of Lloydminster is embarking on includes multiple opportunities for members of the public to learn about the changes and provide their input on the MDP before it is approved by Council.

The project has just been initiated and the City and consultants, Green Space Alliance and POPULUS Community Planning Inc., are beginning the initial analysis and background research in collaboration with City staff.
In addition, a Public Engagement and Communication Plan (PECP) is being prepared to provide a strategy to gather input from residents about the topics and changes that they think are important to consider moving forward.
Timeline 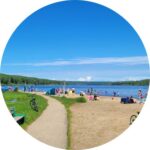 The Community Advisory Committee (CAC) will include a range of community members that demonstrate a commitment to crafting a vision for Lloydminster and a desire to implement that vision.

The new MDP will set the course toward realizing a healthy, prosperous, and resilient future. The process of developing a new MDP will call on the community to rise to the challenge of transforming the community for future generations.